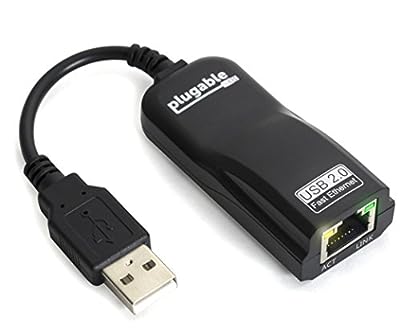 Price: $19.99
As of 2020-02-19 17:41:51 EST (more info)
Product prices and availability are accurate as of 2020-02-19 17:41:51 EST and are subject to change. Any price and availability information displayed on http://www.amazon.com/ at the time of purchase will apply to the purchase of this product.
Buy Now from Amazon
Product Information (more info)
0 0
CERTAIN CONTENT THAT APPEARS ON THIS SITE COMES FROM AMAZON SERVICES LLC. THIS CONTENT IS PROVIDED 'AS IS' AND IS SUBJECT TO CHANGE OR REMOVAL AT ANY TIME.

Features faster-than-wireless speeds and easy connectivity. The Plugable USB 2.0 to 10/100 Network Adapter adds a Fast Ethernet (RJ45) capable port to any supported system. It uses the ASIX AX88772 chipset for widest possible compatibility. Note the adapter is not for network enabling USB devices, rather it's the other way around - it's a USB device that adds a fast wired network interface to supported computers, consoles, and mobile devices running network-capable operating systems.Two LEDs monitor power and link activity. Powered by USB (no external power adapter needed).

Drivers built in -- no driver install required -- on Windows 10 and 8, Nintendo Wii, Wii U, Linux 2.6.35 and newer, ChromeBook, Chumby, and some other systems. Driver download and install required for Mac OS 10.6 and newer. On Windows 7, Vista 32/64-bit drivers are automatically provided via Windows Update. Windows XP, 2000, ME, and 98SE require driver install via download or included disk. Source code/driver available for Linux kernels 2.6.9 - 2.6.34.

Not supported on ARM-based Windows, including Surface RT and Surface 2. Not compatible with Apple iOS or Amazon devices. See plugable.com/products/usb2-e100 for an updated list of compatible Android devices.

Wired Ethernet via this adapter provides faster and more reliable network access than typical 802.11 wireless networking (up to 2-3x as fast). Particularly helpful for web video, downloads, and streaming.Â Useful to replace a broken network port, participate on multiple networks, or give virtual machines their own physical network connection.