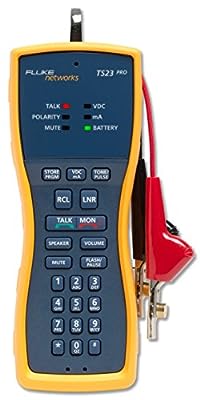 Please choose from the options above to see price and availability.

Product Information (more info)
0 0
CERTAIN CONTENT THAT APPEARS ON THIS SITE COMES FROM AMAZON SERVICES LLC. THIS CONTENT IS PROVIDED 'AS IS' AND IS SUBJECT TO CHANGE OR REMOVAL AT ANY TIME.

The Fluke Networks TS23 Pro telephone test set, available with various line cord connectors to suit specific applications, detects dial tone and polarity; places and receives calls; indicates line voltage and current; has a two-way, adjustable-volume speakerphone for hands-free conversation during testing of telephone lines; monitors lines without disrupting service; and stores up to nine 23-digit telephone numbers which can be speed-dialed via the keypad. It provides tone or pulse operation. The test set has two basic modes of operation: talk mode for off-hook operations including verifying dialing and receiving calls, and monitor mode for on-hook operations including checking for an idle line, listening for line noise, and measuring DC voltage on the line. In monitor mode, the test set provides a high impedance coupling to monitor lines without disrupting service. This test set meets IEC (International Electrotechnical Commission) safety standard 61010-1:2010 and is rated for CAT I installations to 300VDC, which covers equipment on circuits not directly connected to mains. It passes a 20' (6m) drop test and is Ingress Protection certified IP64 for protection against dust and splashed water. The high-visibility glow-in-the-dark keypad has 12 standard dialing keys including star and pound, and function keys to store, recall, and redial numbers and to pause for accessing a second dial tone when dialing through a PBX (private branch exchange), among other functions. It has six dual-color LEDs that indicate talk mode, polarity, mute, voltage (VDC), current (mA), and battery status. The voltage LED indicates five different levels of voltage and an alarm sounds to indicate voltage greater than 140VDC. The current indicator flashes red for less than 23mA and flashes green for greater than or equal to 23mA. The test set can be programmed to turn off automatically after one to 60 minutes (default setting is two minutes) of inactivity to conserve battery life, and is made of high-impact plastic. A spring-loaded belt clip at the base of the unit provides a secure hold on belt loops and D-rings, and a jack accommodates a headset (sold separately). Additional specifications include various environmental operating conditions. Telephone test sets, also called butt sets, are used by telecom technicians to troubleshoot and maintain copper-wire voice-subscriber lines.

Datacom and telecom installation and test devices, such as toners and test sets, check cabling and wiring to help ensure proper connections and operation. Tone generator and probe sets, also called toners, are used to locate, trace, and isolate cables in copper media networks. Telephone test sets, also called butt sets, are specialized telephones that connect to telephone lines to check for proper operation and to isolate trouble. Some test sets incorporate a TDR (time-domain reflectometer) and toner for determining cable length and locating faults. While certain devices may be used on live networks, others are only suitable for inactive networks. Field technicians and installers use these devices to set up, maintain, and troubleshoot datacom and telecom cabling within a building or in outside plant (OSP) applications.

Fluke Networks manufactures tools for network infrastructure installation, testing, certification, and troubleshooting, in copper, fiber, and wireless networks, with its tools widely used by contractors, enterprises, and communication service providers. The company, which operates globally, is based in Everett, WA.

What's in the Box?

Detects dial tone and polarity, places and receives calls, indicates line voltage and current, and has a speakerphone for hands-free conversation during testing of telephone lines Available with various line cord connectors to suit specific applications Monitors lines without disrupting service and stores up to nine 23-digit numbers which can be speed-dialed via the keypad Meets IEC safety standard 61010-1:2010 and is rated for CAT I installations to 300VDC, passes a 20' drop test, and is certified IP64 for protection against dust and splashed water High-visibility glow-in-the-dark keypad with standard dialing keys and function keys, along with six dual-color LED indicators